COVID-19: flexibility will be essential

Everything worked well in the NFL during its first three weeks in business. The COVID-19 outbreak among the Tennessee Titans, with at least 20 members believed to have been infected, has been a game-changer.

The game that was scheduled between the Titans and the Pittsburgh Steelers on Sunday had to be postponed. The league would also investigate to see if the Titans have respected or not its health measures.

According to Jason LaCanfora of CBS Sports.com, the owners, general managers and head coaches of the league's 32 teams have been invited to a teleconference on Monday to discuss the situation. The NFL will especially want to ensure that its instructions are followed to the letter, fearing that there has been a laxity recently.

The possibility that the NFL invites all its teams to stay in a hotel in order to create a kind of bubble is not to be ruled out. This is what the profootballtalk.com website reported in the last few days. The Players' Association should, however, give its consent to such an initiative.

Some other options, including a season with fewer games, 12 or 14 instead of 16, were also discussed. This would give more logistical flexibility in the event that other meetings are postponed, which is extremely likely.

Another way to deal with the current situation would be to simply lengthen the season by ending it at the end of February or even in March if necessary. The players would still have several months (from April to July inclusive) of rest before the start of the camps next summer. And is there really a difference between playing Green Bay or some other city in the northern United States in February or March versus January?

The key issue: the date of the Superbowl

We can guess that the Super Bowl, scheduled for February 7 in Tampa Bay, would be the biggest obstacle to the possibility of extending the season. Ultimately, the NFL could still be forced to move its final ...

In addition to strengthening and enforcing its sanitary measures, the NFL will need to be very flexible over the next few months, starting with its game schedule. Presenting matches on unusual days like Tuesday, Wednesday or even Friday could also make it easier to organize.

And who knows, the NFL might find new opportunities there. A slightly longer season would equate to a bit more rest for the players during this one, which they have been claiming for a long time.

Dak Prescott continues to establish all kinds of individual brands, but the Dallas Cowboys continue to lose. The quarterback totaled 974 yards in his last two games, an NFL record, but the Cowboys have lost both. 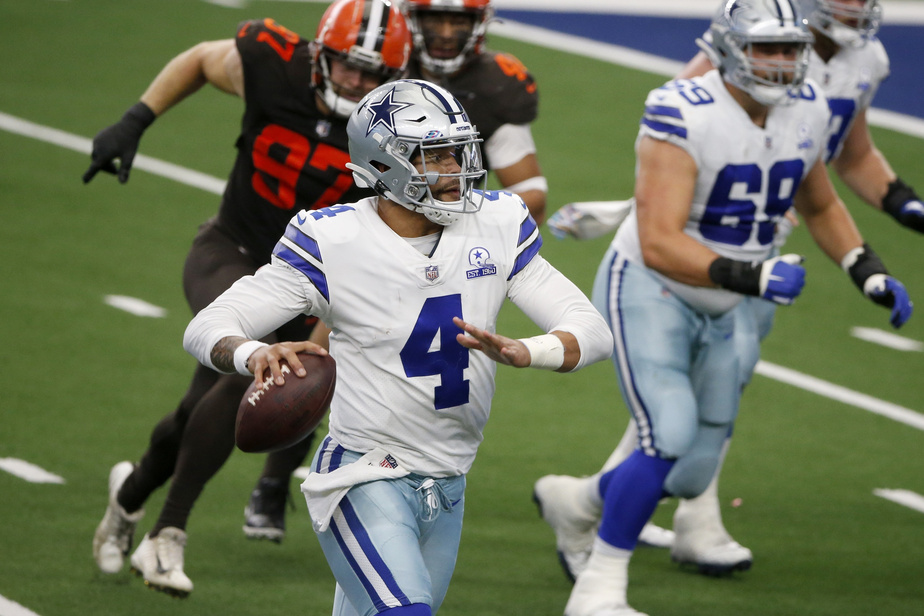 Dallas Cowboys quarterback in Sunday, Oct. 4 loss to the Cleveland Browns at Arlington.

It is of course not because of Prescott that Dallas ends up with a disappointing 1-3 record; it would have been 0-4 if it hadn't been for that miraculous victory over the Falcons. It is the defense that is singled out and for good reason: it has allowed an average of 36.5 points per game, the highest total in the NFL.

Prescott and the offense kept the Cowboys alive with a touchdown in the closing minutes of the game against Cleveland on Sunday. But Odell Beckham Jr. secured the Browns victory afterwards with his third touchdown of the game a few minutes later. The receiver mocked the Cowboys defense, who missed several opportunities to tackle him on the streak. Embarrassing.

Paired with the Eagles 'victory in San Francisco, the Cowboys' 49-38 loss relegated Mike McCarthy's team to second in the National East Division, by far the worst in the NFL. We all believed that the change to the head coach position would make the Cowboys a better team, but that's not the reason at all.

OF LIFE AT THE EAGLES

It was quite difficult to navigate there on Sunday evening. Both decimated by injuries, the Eagles and the 49 ers relied on a number of reserve players. But surprisingly, the game in Santa Clara was one of the most interesting of the day. 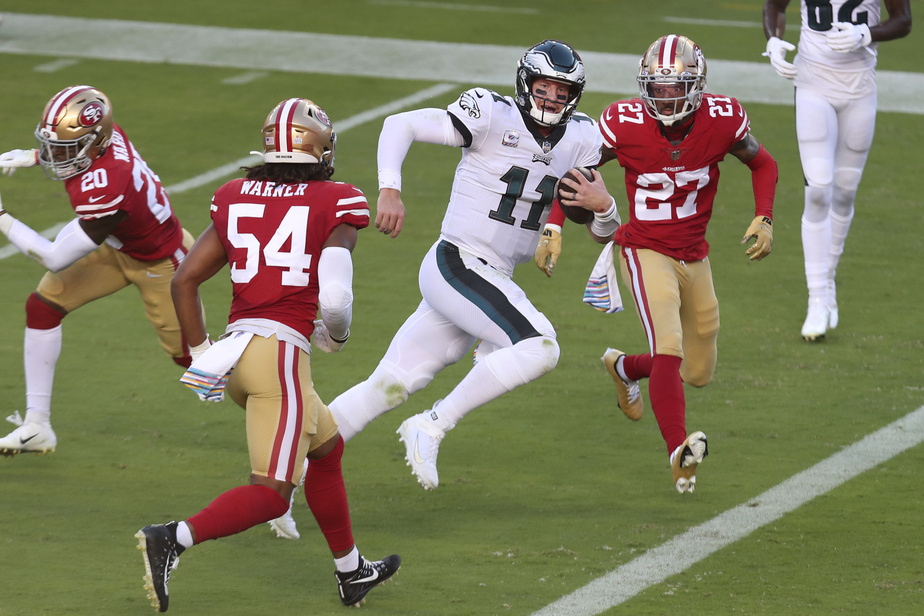 As for Doug Pederson and his assistants, they may not have built such a creative game plan since winning the Super Bowl nearly three years ago.

By winning, 25-20, the Eagles gave hope to their supporters, many of whom had already thrown the towel after an ugly start to the season that was marked by an ugly loss to Washington and a draw against the Bengals. And the way the Cowboys defense plays, anything becomes possible in the East National.

Very good in the first game he played as a replacement for Jimmy Garoppolo, Nick Mullens sank the Niners by throwing an interception in the middle of the fourth quarter. Former Calgary Stampeders Alex Singleton pulled off the game. The former CFL defensive player of the year scored a major after catching Mullens' bad pass.

George Kittle and Deebo Samuel returned to the game on Sunday, and rookie Brandon Aiyuk hit a spectacular touchdown as he jumped over an Eagles player who was trying to tackle him. If Garoppolo has to miss another game, as he is treating an ankle injury, it will be interesting to see if Kyle Shanahan gives Mullens another chance or if he turns to CJ Beathard, who did well in the final minutes instead. of Sunday's game.

Drew Brees' first pass was intercepted and the New Orleans Saints trailed 14-0 after five minutes of play Sunday in Detroit. 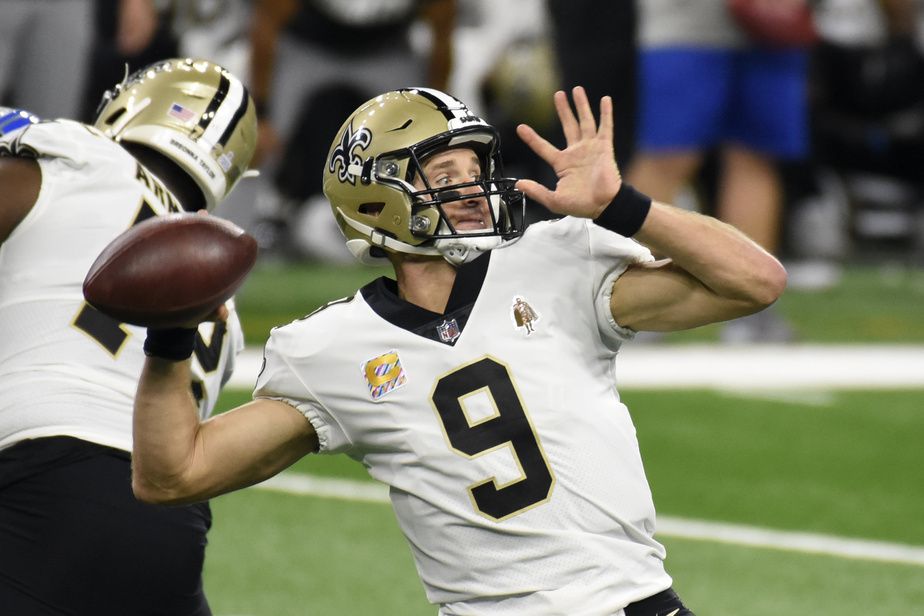 After two consecutive defeats, the situation was starting to be very worrying for the Saints.

But Brees pulled himself together. He completed 19 of his next 24 passes, threw two touchdowns, and the Saints ultimately defeated the Lions, 35-29.

The scenario was similar in Tampa Bay. Tom Brady threw an interception that was brought into the end zone for the fourth time in his last six games, and the Buccaneers were down 24-7 to the Chargers at one point. 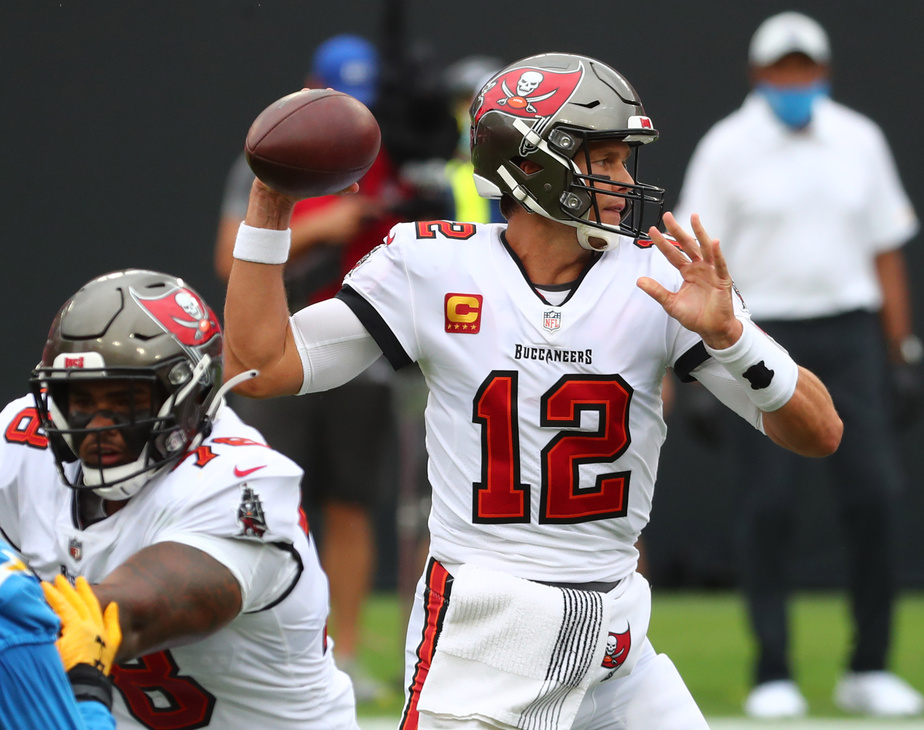 The Chargers lost the ball close to their goals late in the first half, however, and the game completely changed from there. Brady threw one of his five afternoon touchdown passes shortly after, and the Bucs won, 38-31, their third straight victory.

Being 43 and 41 years old, Brady and Brees can no longer be expected to dominate every week, or even for an entire game. However, they recalled on Sunday that they could still do the job.

CARR IS TIRED OF LOSING

The Las Vegas Raiders are playing for .500 (2-2) and gave the Buffalo Bills good opposition despite their loss of 30-23 on Sunday. Derek Carr did not want to seek moral victories, however.

“I'm sick of losing. I'm tired of working so hard, like the whole team, and of continuing to lose. That's enough, ”Carr told ESPN following the second straight setback.

Raiders owner Mike Davis probably agrees. He gave Jon Gruden a 100million deal almost three years ago and wins are slow to follow. The Raiders are progressing slowly, but their losing streak is likely to continue over the next few weeks.

The Silver and Black face the Chiefs in Kansas City next Sunday; the Tampa Bay Buccaneers in prime time in Vegas on October 25; then the Browns in Cleveland, the 1 st  of November. If they don't win at least one of these three games, their chances of making the playoffs will be slim.